“Developing local talent and promoting basketball in Howard County and the surrounding area, through camps, clinics and summer AAU teams.”

Congratulations to the players of the HC Elite 2021 Team (9th graders.)  Every player on the team made their HS team including two players who made varsity as Freshman.

Growing up, Daniel developed his game while playing on the HC Elite AAU basketball squad under coach Bill Napolitano and alongside guys like fellow all-county performer Tom Brown from Centennial. Looking back, Kiely says he credits an incredible amount of his success over the years to the foundation that was laid long before he reached high school.

“I owe a lot to all my coaches. Coach Browne, he’s helped me a ton and has always been there for me, my family and my brothers. But I owe the most to my AAU coach Bill Napolitano,” Kiely said. “He taught me how to shoot a real jump shot and basically everything I know about basketball. He got me ready for high school and I can’t thank him enough for that.”

Player of the Year, Kiely, and all six players on 2016 First Team All-County are former HC Elite Players. 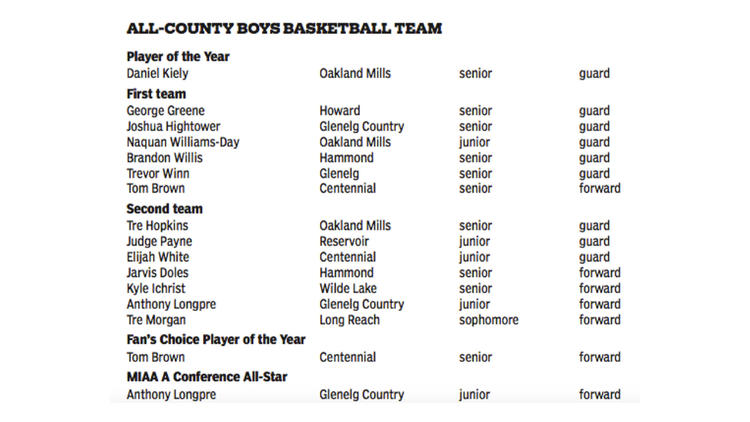 Terps Get Ready for Iowa

“Playing with the Elite was a great experience and Coach Nap helped me take my game to the next level. He put me through hard workouts every practice and always stayed on me to improve.”

“Great camp! My son has attended many basketball camps over the years, and I can’t ever remember him being as enthusiastic as he was for this one. He came home every night tired, with a smile on his face, and excited to go again the next day. “Coach Bill worked us hard, but made it fun at the same time. He really helped me take my game to the next level”.

Congratulations to the players of the HC Elite 2021 Team (9th graders.)  Every player on the team made their HS team including two players who made varsity as Freshman.

Former HC Elite standout player and camp counselor Varun Ram transferred to University of MD this past summer after spending his Freshman year at Trinity College in CT. A 4.0 student, Ram was attracted to U MD’s nationally ranked Science and Technology programs. Although the 5’10” Ram started as a Freshman on the D3 Trinity basketball team, he knew it would be tough to even get a tryout with the Terps. After a long wait and not knowing if he’d even get a chance to try out for the team, the former All Met, point guard was told he would get a two week tryout. Yet after just a couple of practices, he was told he had made the team. “I couldn’t be happier” said Ram while celebrating with a small group of close friends and family right after getting the good news about his selection to the team. Word started spreading in the local basketball community that Ram had made the team as a walk on. Ram is well known among fellow Howard County players as a basketball junkie; a guy who is always in the gym working on his game. The most common response from players when hearing that Ram made the team? “I’m not surprised. That’s the hardest working player I have ever seen.”